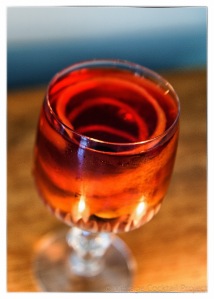 I was curious about this cocktail, largely because I really wanted to try the kirschwasser. We have several cherry-based spirits in our liquor cabinet and I wondered how this would compare. 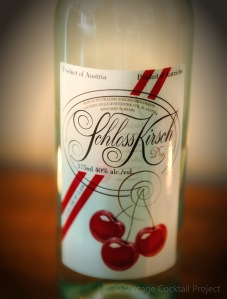 As with any new product we bring into the house, we tasted it on its own before using it as a cocktail ingredient. We discovered that kirschwasser is exceptionally dry, almost like a cherry grappa, and not at all like its sweeter cousins: maraschino, cherry heering, or Luxardo morlacco. I continued to be intrigued.

Once mixed the cocktail, which donned an enticing ruby hue, had a lovely nose, reminiscent of a pinot noir rosé or of a summer sangria, with red fruit dominating. We found the palate, however, to be governed by the gin. I actually found that the kirschwasser made the gin more pronounced, rather than balancing it out. As the cocktail warmed up (is a cocktail supposed to warm up?), the drink mellowed, with the cherry notes increasing on the nose and the Dubonnet emerging on the palate. Whilst I attempted to coax some thoughts from D regarding The Blackthrorn, he reached for Vintage Spirits and Forgotten Cocktails and thumbed ahead to the next libation, The Blinker, declaring: “I’m gonna love The Blinker. I hate grapefruit and I’m not crazy about raspberry, but for one week The Blinker will be on my top 5 list!” It would seem that five gin cocktails in succession is D’s limit. Incidentally, D also demanded that I stop using the word ‘libation,’ declaring it to be “pretentious.” Sheesh. I’d like to see him come up with seven synonyms for ‘cocktail.’ 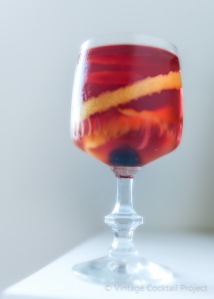 Ted Haigh notes that The Blackthorn is a sister cocktail to The Amarosa, which regrettably, we have yet to try. Our search for Amaro Cora weighs on us. Damn you, Amaro Cora! D keeps threatening to buy a 30-year-old bottle off an auction site for an outrageous price but I have, thus far, reigned him in. As for The Blackthorn it is a pretty little thing that shows well but lacks pizazz on the palate. The lemon zest and cherry garnish help to reinforce the subtle flavors of the drink itself.

Stir over ice. Strain. Garnish with a cherry and a lemon twist.